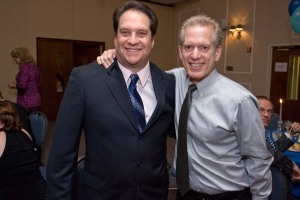 My wife is Jeff’s sister, Lisa.  Lisa and Jeff are remarkably close siblings.  Close in age and identical in their approach to life, both chose the same avocation and direct it in a way that showcases the best in people.  Their brother Darryl shares this ethical image of what the world should be, an image that was formulated by the example set by their parents, Harry and Naomi.  Quite simply, they believe that happiness is grounded  in the love of family.

Jeff extended his love of family to include all people, all of humanity in fact, through his gift of the written word.  His books and articles paint a rich tapestry of a world based on love and mutual respect that inspires the best in all of us.

And Jeff did more than just talk the talk.  He walked the walked by living his life according to this simple creed -treat others the way you would like to be treated.  And recognizing his talent as a gifted journalist, he acknowledged his responsibility to use that gift to speak for those without influence or power or connections.  Jeff’s targets were not necessarily the halls of government or boardrooms of industry.  Rather, his heros were the last one picked for the softball team, the girl not asked to the dance, the old woman waiting for the bus in the cold.  We recently spoke about the Steve Job’s biography and how many books were sold.  Jeff discredited the book’s sales because Job’s was “not a nice person”.   When I think of all of Jeff’s accomplishments, what is most moving to me is his receipt of the Will Rogers Humanitarian Award.  I truly believe Jeff saw his duty as a newspaperman was to comfort the afflicted and afflict the comfortable.

As successful as he was professionally, Jeff always made time for his family.  It takes an incredible amount of effort to have time for both career and family.   Most of us have to sacrifice one for the other but Jeff had both because of his gargantuan level of energy.  I know because Lisa is exactly the same way.

One of the first times I met Jeff was in NYC.  Lisa and I were engaged and my car was impounded for a parking violation.  Jeff did an article about it and got a huge response from readers.  It made me feel special that he wrote that story and I realized later that he did it because I was family.

Even though he lived in Detroit, Jeff was present at the birth of each of my three children.  When my daughter Talia was born, Jeff cancelled a speaking engagement to be at her naming.  The person who arranged the engagement complained to Jeff that the only reason one could cancel was on account of life or death.  “Well”, Jeff said, “this is life.”  Because of the closeness between Lisa and Jeff, our families are very close.  Over the years, we have tried to spend a week in the summer and a week in the winter together.  Now, those vacations and the memories they have spawned are more important than ever.

Like everyone else, I am feeling a complete sense of loss and a wound in my heart.  So, to close, I offer the following to the Zaslow, Margolis, and Segelman families and extended families and all Jeff’s friends and colleagues who are grieving.  Let us cherish the time we were allowed to spend with him and comfort each other in the warmth of his love.  Jeff, you will be missed but never forgotten.

One thought on “David Segelman, Brother-In-Law”